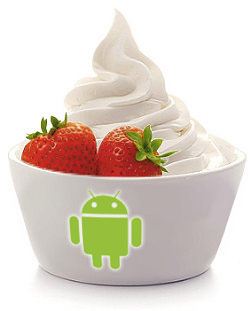 Looks like the next big iteration of Android will not be known as ‘Flan‘, as many expected. According to Erick Tseng, the Senior Product Manager for Android, the next version of Android will be named ‘Froyo’. I can already hear some saying, ‘but I thought Android 2.1 was named Flan, what gives?’. Technically, that’s not the case. Android 2.1 is still considered part of ‘Eclair’, so it looks like ‘Flan’ may have hit the garbage bin.

‘Froyo’ might leave you scratching your head a bit, but think about it. ‘Froyo’ is short for ‘Frozen Yogurt’, which, I suppose fits in with the Cupcake/Donut/Eclair theme in some way. I mean, heck, it’s another food product. No tasty baked goodness this time around… But I suppose a change from fatty baked goods to healthy frozen treats is a good move.

Note: Let the guesswork begin for the letter ‘G’. Any ideas? All I can think of at the moment is ‘Ginger Snaps’. Wish I had one right now.

MOTOROI Coming to Korea with Android 2.0

Motorola is pushing their Android efforts into Korea after making something of a splash in North America with the droid....