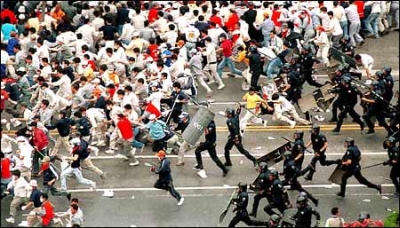 Workers went on strike at a touch-screen supplier for Apple Inc.’s iPhone in China’s eastern city of Suzhou on Jan. 15, the 21st Century Business Herald reported, citing a statement from the high-tech zone home to the factory.

More than 2,000 workers gathered and damaged facilities and vehicles after rumors that the factory may not pay a planned bonus for 2009, the newspaper said, citing the statement. The plant belongs to Taiwan-based Wintek Corp., the world’s biggest touch-screen maker for mobile phones.

With the memory of that iPhone suicide still fresh in my mind, this is yet another blow to Apple’s image. The marketing is brilliant, the products are excellent, the fan base is annoyingly lenient and forgiving, but the end of the Apple rainbow, where the little elves make the toys that little boys and girls from all over the world buy, that’s where the trouble starts. It isn’t just Apple though, every company that uses Chinese labor is going to soon be facing such issues. This bulletin is less about Apple and more about the state of the labor union in China. People flooding into makeshift cities where the factory in the center of town is the only beacon of financial prosperity are starting to want more, and more, and they frankly deserve it.

Piss them off and you get this.