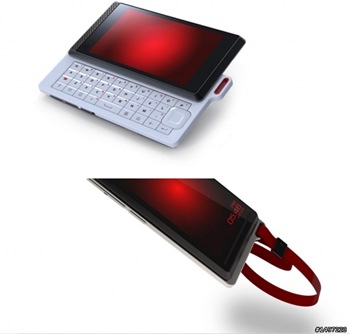 Some pictures of what is supposedly the next iteration of the Motorola droid have bubbled up, featuring a redesigned keyboard and wrist strap. Take this one with a brick-sized grain of salt – there’s a good chance this is a rendering cooked up by an ambitious design student, but you never know. Details are scarce, aside from the fact that this would be released before the Nexus Two rolls around, although there is some confusion arising from Google translation that this actually is the Nexus Two. That seems unlikely, considering HTC handled the original and would likely do any sequel, but maybe Google has decided to mix up manufacturers for each phone that they will be selling unsubsidized; that would certainly put Google’s valuable Android partners at ease about feeling undercut. Whatever the case may be, these pictures line up well enough with the first glimpse of what was purportedly the Motorola Shadow, which will have a 4.3” WVGA display, 8 megapixel camera, and HDMI out, according to tipsters.  If those specs and that form factor turn out to be true, the Shadow should stand to be a worthy successor to both the droid and the Nexus One.