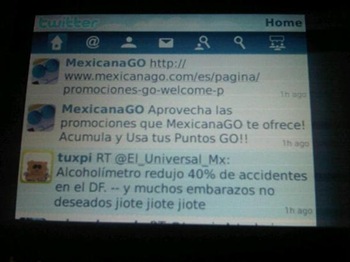 At a Mexican Bold launch, this picture of RIM’s work-in-progress Twitter client for BlackBerry slipped out. We’ve been hearing about this project for awhile now, and even seen traces of it being used in the wild, but this is the first proper screenshot to surface. As you can see, it’s nothing mind-blowing, including the usual fare like friends timeline, your timeline, @ mentions, direct messages, people and keyword search, and lists, but the real killer feature here will be the use of push services to deliver mentions and messages in real-time. Seesmic is picking up steam, UberTwitter has a solid following, and SocialScope continues its closed beta, but few (if any) of these apps will stand a chance against RIM preloading their devices with their own Twitter client, especially if it’s the only one with push. The official BlackBerry Twitter client will apparently go live in February; RIM will have a full day for Mobile World Congress’ App Planet next month, which seems like a more than appropriate occasion to launch.