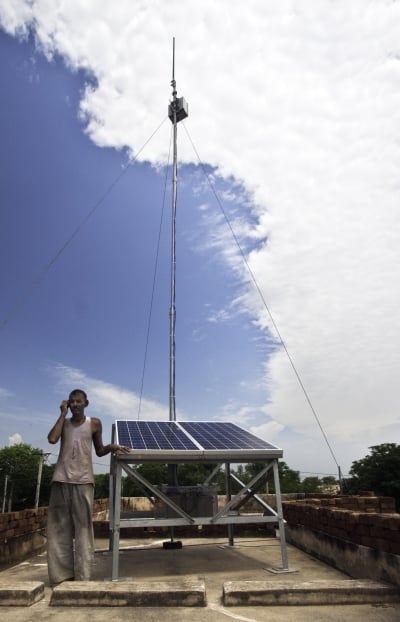 Connecting the poorest of the poor to the rest of the world isn’t simply a matter of making a cheap mobile handset. Networks need to be in place so people can use that Nokia 1100 they’ve been saving up for 6 months to buy. The problem is electricity, networks new it to run. How do you connect a village when there is no power? Enter VNL and their WorldGSM system. They claim that India alone uses 1.8 billion liters (475 million gallons) of diesel fuel every year just to power cell towers, which is why they’ve developed a 100% solar powered wireless network. Each base station consumes less than 100 watts. Deploying the network, which can cost less than $15,000, is easy enough that even illiterate people can do it; the whole system fits inside 2 crates. The network can also be run at a profit if 50 people signed up at $2 per month, and the only maintenance required is that the solar panels be cleaned once a week.

In December the World Economic Forum named VNL a 2010 Technology Pioneers, only 26 companies receives this award, and it probably isn’t going to be long until Nokia Siemens Networks or Huawei buy these guys. The technology is cool, the mission is just, and the concept can be brought to the western world to make networks in more developed countries more power efficent.

Vodafone UK gets in to Femtocells with launch of ‘SureSignal’

Vodafone UK has relased some PR to talk about it's new(ly branded) SureSignal product, which is a Femtocell that plugs...