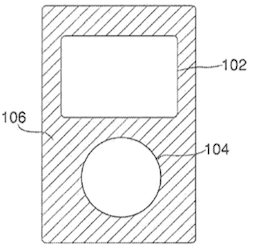 Apple has their sights set on making their iPhone as green as possible, it seems. A newly discovered patent application from the Cupertino-based iPhone maker hints at the company’s ongoing interest in powering their iPhone with solar cells. The patent describes power management methods that would allow portable media devices, like the iPhone, to draw power from solar and battery power. There’s also mention of a technology that would allow the iPhone to configure the solar cell circuitry to continue generating power even when a subset of the cells are hidden from sunlight.

This latest patent application re-emphasize Apple’s interest in green technology. Apple, in 2008, filed for a patent that would put a solar panel behind the LCD display of the iPhone. The idea was to put the solar panels on the front-side of the device, allowing the iPhone to charge its batteries when in use. This time around, Apple is apparently considering methods that would allow solar panels to continue generating power in changing conditions. With those two patents combined, a solar-powered iPhone might be capable of drawing solar power in a variety of conditions while preserving the iPhone’s minimalist design aesthetic.

As with all patents, we’re not guaranteed to see this technology ever making it into production. Fuel cells are another viable alternative fuel source that might give solar power technologies a run for their money. Still, we’d love to see a solar-powered iPhone in the future.