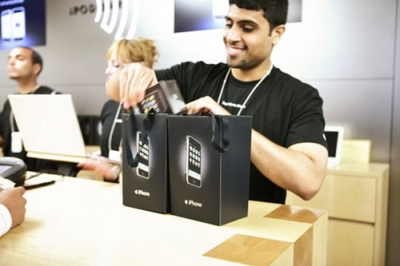 Apple just posted their Q1 2010 numbers and while we’re digesting them have a look at the press release yourself after the jump.

CFO talking a mile a minute, here is what I got out of the call: iPhone average selling price is $620, revenue made from these 8.7 million iPhones is over $5.4 billion.

“70% of Fortune 100s are actively piloting or deploying iPhone” — Ars.Technica live call coverage, the audio I was listening to got cut off

“We acquired Quattro to offer a seamless way for developers to make more money on their apps, especially free apps”

“In Japan, the iPhone has been a runaway hit. Up over 400% year over year”

“Mobile advertising is in its infancy, and with the great folks we’ve acquired from Quattro, we look forward to providing our developers with a great opportunity for mobile advertising”

Very interested to see how Apple sets up Quattro and the margins they’ll be targeting. Google makes all their money on ads, while Apple could give most or all the ad revenue to developers since they have a very healthy hardware business. Time will tell.

“If you annualize our quarterly revenue, it’s surprising that Apple is now a $50+ billion company,” said Steve Jobs, Apple’s CEO. “The new products we are planning to release this year are very strong, starting this week with a major new product that we’re really excited about.”