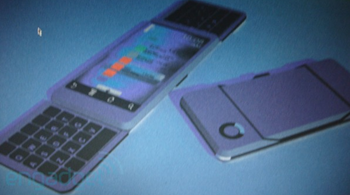 Some slightly questionable renderings of a new Motorola handset dubbed motosplit have come to light, bearing a fresh (although not entirely unheard-of) form factor. As you can see, the keyboard splits in two, off to either side of the device, and tuck back underneath as needed. All we’re hearing in terms of hard specs is that it’ll be running Android and packs the almighty 1 GHz Snapdragon processor under the hood. It’s hard to tell what’s going on with the UI there – maybe motoblur? In any case, the motosplit should be coming to AT&T in Q3 of this year. AT&T has yet to really jump into the Android pool, but rumours have been swirling that the Backflip and Nexus One would be coming their way at some point. Considering the relatively original device layout and the burgeoning popularity of Android, the motosplit could do some very good things for AT&T should this particular rumour pan out. Do you guys dig the form factor, or is it just a little too wacky?