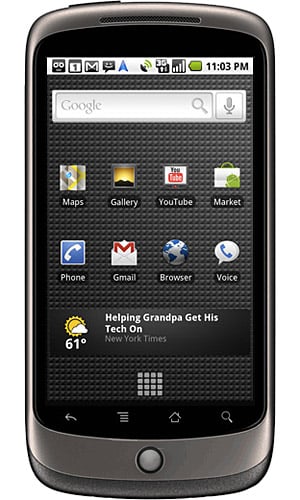 The Nexus One has been revered time and time again, by us and many other mobile blogs, as the most likely contender to unseat the iPhone as the de facto king of the smartphone space. Unfortunately, the N1 hasn’t been able to realize it’s full iPhone-killing potential due to its lack of multi-touch support. That all changes today. Today, the Prince of smartphones comes into its own, giving the King a serious challenge for the smartphone throne.

The Nexus One update will also make Google Goggles a default app, allowing users to snap pictures of everyday objects and search the web using that image. It will also bring Google Maps up to version 3.4, which synchronizes starred items, offers search suggestions, and a new Night Mode for easy nighttime viewing. Thankfully, Google says the update will fix 3G connectivity issues.

Powered by Android OS 2.1, the Nexus One offers Android fans the most advanced Android features on market today – in fact, no other Android phone currently runs Android 2.1. And, with a feature-set that includes a 1Ghz processor, 3.7-inch capacitive OLED touchscreen, 5-megapixel camera with flash, 3G, WiFi, and GPS packed into a body no thicker than a pencil, it’s clear that the Nexus One is one of this year’s hottest smartphones. The N1 just needed pinch-to-zoom functionality to give it the chops to take the iPhone 3GS head-on.

It’s actually amazing how much of a difference pinch-to-zoom functionality makes on a smartphone with a capacitive touchscreen. I’ve personally felt that the Nexus One was fully capable of hanging with the iPhone without pinch-zooming capabilities. Now that it has multi-touch, though, the N1 has the potential to give Apple reason to sweat.

WordPress, the definitive open source blogging platform, now has an app available for Android. It allows publishing across multiple blogs,...