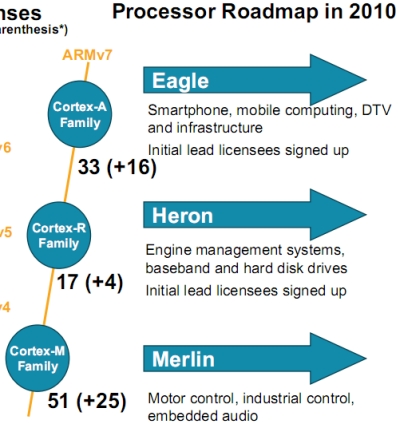 During ARM’s Q4 2009 and full year 2009 earnings call today (22 page transcript), ARM CEO Warren East showed a sneak peak of the company’s roadmap for 2010 and the bit that stuck out for us mobile phone geeks was the ARM Eagle. Based on the same ARM v7 architecture that the Cortex A8 and Cortex A9 share, the Eagle is said to take ARM’s application processors “onto yet another level of high performance”.

We’ve yet to see any Cortex A9 powered devices hit the market yet, and while Will did get a chance to play with some early A9 powered NVIDIA Tegra 2 tablets, they were far from final. Anand Lal Shimpi, someone who knows more about chipsets than I know about anything, says that the Cortex A9 is between 30% to 100% faster than the A8 depending on the task performed. If Eagle is supposed to take an already faster chip to the next level, can you imagine the speed of the next product that fits inside you pocket?

Typically it takes chip designers 2 years to go from ARM announcing a new processor, to actual products, so the Eagle will land in 2012. That’s an eternity in the mobile space, but here’s hoping it shows up in the 6th generation iPhone. More information will be unveiled about Eagle at a later date.

Vodafone UK has launched a new online business centre, which brings information on its full range of mobile, fixed and...