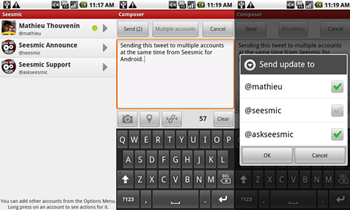 Seesmic, an increasingly popular smartphone twitter client, has recently updated their Android app to include support for multiple accounts. A related feature includes cross-posting, so you can shoot out a tweet across those different accounts. A few smaller changes, like saving your timeline position, tap to zoom to the top, an extra large text option for the hard of eyesight, and auto-correcting text are also a part of the latest version.

Seesmic’s BlackBerry app got some lovin’ recently too, with Google Maps integration and picture previewing, but I’m still waiting to see what Seesmic does with their Ping.fm acquisition; it probably won’t be anything more than simply posting updates and media to multiple networks at once. Traditionally, Seesmic has stuck to desktop, either through an app or nicely-built web page (which I’ve been using to manage my own twitter account for the last month or two).

Seesmic has done a really impressive job of blitzing mobile – they’ve only been out since November, and they’re already getting some good featured time in the Market. Twidroid (who had multiple account support since September) is the incumbent to beat, but considering a lot of the complaints I’ve heard about Twidroid being laggy and a memory hog, I could see Seesmic making it to the number one spot. Even if Seesmic doesn’t manage to do that, they have a lot of other platforms to expand into, like webOS, Symbian and iPhone. 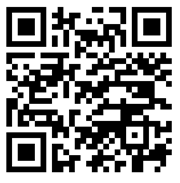 For serious social networkers, multiple accounts is a must before users will even look sideways at a mobile twitter app. To see if Seesmic’s implementation works for you, look up them up in the Android Market, scan this here barcode, or go to Seesmic’s Android page for a closer look.

I used to argue Nokia should acquire Evernote (among other companies). Now in the effort to get all those Evernote...