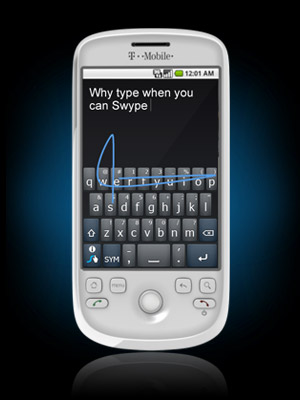 With the launch of the updated T-Mobile myTouch3G (myTouch 3G 1.2, for those of you keeping score at home), T-Mobile has kicked off a partnership with Swype to include the Swype keyboard on many of its touchscreen handsets. The Swype keyboard is the first truly innovative virtual keyboard to hit the scene in some time, and offers a familiar QWERTY layout that eschews the old-school method of tapping keyboard keys in favor of a letter-tracing method that has the user dragging their finger across keys to form a word. Gone are the days of inefficiently trying to avoid typos as you tap out words – it’s all about swiping your finger to “type” your emails.

The T-Mobile myTouch3G might be the first T-Mobile handset to be blessed with the more accurate and clumsy-finger-friendly Swype keyboard, but it won’t be the last. We’re told to expect to see Swype doing its thing on the upcoming HTC HD2 as well as a handful of other Android- and Windows Mobile-powered smartphones in the coming months.

If you haven’t had a chance to check out Swype, take a look at the demo video below. And, if you’re using a Motorola Droid, you can install Swype by following our tutorial here.