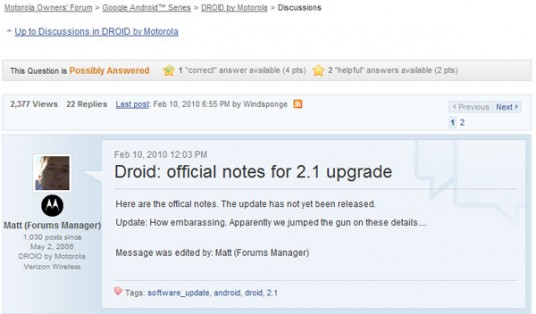 Remember when Motorola announced through its Facebook page that their Motorola Droid would be getting the anticipated Android OS 2.1 update this week? Yeah, well, turns out Motorola jumped the gun on that one. We don’t want to be the ones to rain your Android-parade, but Motorola has posted to their support forums a message about how Motorola revealed information about the Android 2.1 update before they were ready to actually release it. Droid users will have to make do with multi-touch zooming for the time being.

The Android 2.1 update was expected to finally bring the Droid up to speed with the Nexus One, which is still the only Android smartphone to run the newest Android OS version. But, with this announcement, Motorola has apparently pulled the Droid update page and all links to the update page are now dead. That means we probably won’t be seeing the update going live before Mobile World Congress.

With that said, Mobile World Congress will be keeping us busy as bees next week, so we’re not too sad to hear that our Droid won’t get updated for a couple weeks. All you eager Droid users are probably a little more deflated by this news, but at least you’ll have plenty of IntoMobile’s live coverage from MWC to keep you distracted!

Skyfire is still the only mobile web browser in the world that's capable of streaming all sorts of embedded videos...