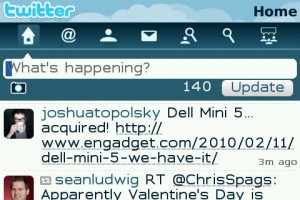 So, this morning me and the better half of the mobile blogosphere were given the chance to play with RIM’s upcoming Twitter client for BlackBerry that we’ve been hearing so much about. Everything you’d expect is there, like instantaneous notifications of @ replies and direct messages within the Messages application, home screen notifications, checking your friends timeline, uploading pictures from the BlackBerry’s camera, and taking a look at trending topics. Keyword searches can be limited to location within your area, too.

Overall, the client is not what you’d call stable (it’s super-duper-beta, and doesn’t cache tweets or profile pictures), but the user interface is shiny and general navigation works well with all of the appropriate native apps and keyboard shortcuts. Replying to tweets from Messages brings up a small window that overlays half the screen in a pretty eye-catching way, and you can view conversations as whole threads. You can share web links through the browser and App World links that are apporiately shortened via bit.ly, which is a nice touch. Address book integration that allows you to link Twitter followers to BlackBerry contacts (like the other instant messaging clients) is one thing I’d like to see, but not included just yet. The app recognizes Twitter’s native uneditable retweeting standard, but not the geolocation services. Two definite downers I’ve been able to spot so far: one, no lists support; two, no multiple account support. These are things that might come with the public release or update down the line, but really should have been included from the get-go if RIM wanted to compete with existing apps.

Third party apps have been duking it out to claim the throne as number one for awhile now, but with the manufacturer itself stepping into the ring, it’ll be harder to get visibility. RIM’s leveraging push in order to get tweets to BlackBerry users faster than anyone so far, and if it’s an acceptable app that’s preloaded on every device from here on in, few people will see a reason to switch. Can’t wait to try this out for yourself? Twitter for BlackBerry should be available in about a month for devices running OS 4.5 and higher, and will include English, French, Italian, German, Spanish and Brazilian Portuguese language support. Here are some screenshots, but we have our own video uploading presently. Hit up BlackBerry’s site for notifications when Twitter is available for you.

UPDATE: Oh hey, we got video now. Part 1 is a bit long, I uploaded without editing. Fast-forwarding is your friend.