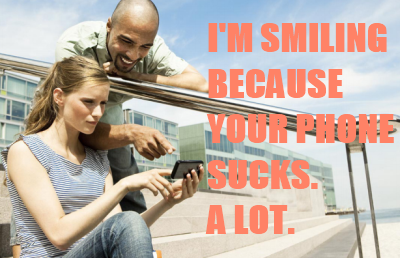 One of my predictions for 2010 was that we’re going to see smartphones being driven down to obscene price levels. Specifications, like that of the Nokia N95, which at one point not only blew our minds, but also cost about a month’s worth of rent, are going to be obtainable for less than half of what early adopters paid for their devices in 2007 and 2008. ST-Ericsson today announced the U6715, a chip that contains an ARM ARM926EJ-S processor clocked at 468 MHz, which sounds impressive, until you notice that the ARM926EJ-S is based on ARMv5 architecture. In human language, the applications processor inside the U6715 is a generation behind devices like the Nokia N95/E90/N82 and the N800. It’s going to be slow.

Now granted, the U6715 does support 7.2 Mbps HSPA, GPS, WiFi, a QWVGA display, TV out, and a compass, but will customers buying smartphones utilizing this chip be staring at their devices, waiting for their taps to be recognized while slowly developing a strong feeling of regret towards their purchase? That remains to be seen. ST-Ericsson say that devices with the U6715 will be hitting the market during the first half of this year, meaning they’ve been sampled for quite a while now, but nobody bothered saying anything.

Whether or not this chip delivers a useful performance to price ratio is irrelevant, what we’re seeing is an industry acknowledge that a smartphone is no longer something that can only be purchased by someone working for a Fortune 500 company, but instead it’s evolving into a class of device that will soon be enjoyable by everyone.

According to my buddy Ron over at 3d-display-info.com, PureDepth have announced that they have acquired a patent for Multi-Layer 3D...