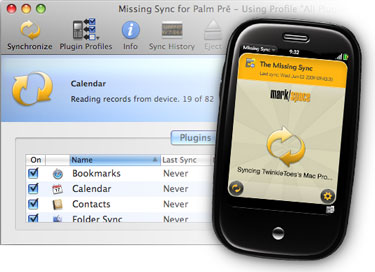 Just a quickie here… the title of the post pretty much says it all, doesn’t it? Mark/Space have added two-way calendar synchronization to The Missing Sync for Palm Pre, Windows PC edition. With this update, both the Mac AND PC versions can now sync calendars to and from a Palm Pre, Palm Pre Plus, or Palm Pixi Plus.

If you’ve never heard of The Missing Sync before, it’s an awesome synchronization tool that helps you sync contacts, music, documents, ringtones and a whole bunch of other stuff between your device and PC (or Mac!). Versions are available for Android, iPhone, BlackBerry, Win-Mo, Palm OS, Symbian OS, Nokia, the HTC Touch, Sony PSP, and yes… of course the Palm Pre (and Pixi).

For more information on the update, hit up Mark/Space.