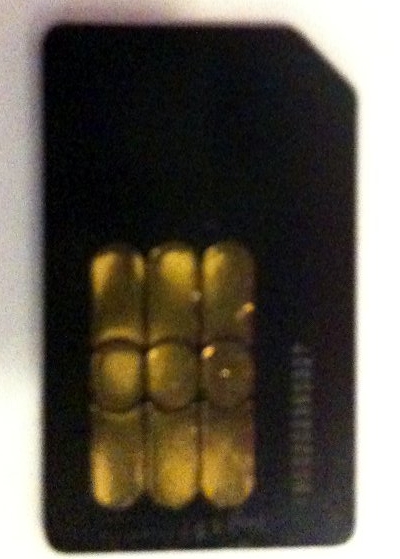 When you think of a SIM card, innovation isn’t exactly the first word that pops into mind. For Europeans and Asians, a SIM card is where they keep all their contacts, and what they actually pay for every month out of pocket. Most people purchase their devices unlocked. For Americans, the SIM card is still this weird concept. A phone should come activated and already working from an operator. Your monthly fee covers not only the phone, but your service as well. Anything requiring more steps is too complicated. But back to innovation, two companies have announced two separate SIM card products that really make you stop and appreciate how far we’ve come in terms of miniaturization.

First we have Sagem Orga, who in conjunction with Telefonica, released the “SIMFi”, a SIM card with built in WiFi. It wasn’t invented to give phones without WiFi the ability to access existing WLAN networks, instead it was invented to compete with devices like the MiFi. Yes, you read that right, the SIMFi transmits a WiFi signal that your iPad, laptop, iPod Touch, or whatever, can connect to and utilize. Whether or not it’ll take off remains to be seen.

It isn’t mentioned how expensive these new SIM cards are, plus one can’t even begin to wrap their minds around the billing models operators need to think up for this new category of product. From a future use case point of view, it’s interesting that someone could potentially pick up some cheap, low end Nokia, and also have an advanced iPod Touch or other tablet like device with them at all times, and use WiFi for connectivity. Your phone literally becomes nothing but a tool for calls, SMS, and a provider of network connectivity for your peripheral devices. I can’t imagine it’s too nice on the battery.

Next there is Jiangsu Changjiang Electronics Technology (JCET) who managed to shove NFC onto a SIM card; pictured above. China Mobile ordered 3 million NFC SIM cards and have plans to deploy them immediately, but mainly for use at the Shanghai World Expo in May. Current China Mobile customers can pick up a NFC SIM for a mere $22, pop it into the mobile phone they already have, and then start paying for things at WuMart and MerryMart supermarkets in Beijing. That’s bloody awesome, but it’s also highly proprietary.

The GSMA, the folks who maintain the GSM standard and who are hosting Mobile World Congress next week, recently signed agreements with the NFC Forum so that their technology can work together. After all, if I’m in Germany, traveling to Italy, and both countries have NFC readers, why shouldn’t I be able to buy a cup of coffee from both countries without being burdened to check and see if my device is compatible with a “foreign” payment system? The Chinese NFC SIM, while brilliant since it operates in the already used 2.4 GHz spectrum, versus 13.54 MHz for NFC, and allows customers to use whatever device they want, will only work in China.

The two other Chinese operators, China Telecom and China Unicom, want in on this NFC SIM action too. China Telecom is starting trials in Shanghai with 1,000 customers at 200 points of sale using SIM cards made by Seimma, and while China Unicom is doing the same thing, albeit in the Zhejiang Province, they’re also experimenting with standards based NFC technology.

Not to be out done by the Chinese wireless telecommunication industry, an American company, based out of Colorado by the name of MobilePay, is planning on brining the NFC SIM concept to every corner of the world.

What do you think, NFC in devices versus NFC on a SIM card, which will take off and why? As lustworthy as the NFC SIM is from a consumer perspective, the name of the game in the wireless space is ecosystems. NFC has a large, standards based ecosystem, so while we’ll have to wait a bit longer, and buy yet another new phone, at least we can be confident our NFC will work everywhere.