It doesn’t take a rocket scientist to figure out that Microsoft needs to pull a dinosaur out of a magic hat to impress everyone at Mobile World Congress. The next version of Windows Mobile, or Windows Phone, or whatever you want to call it, is supposed to save the company’s ass, and if it doesn’t … well then it’s simply more money that goes inside the pocket’s of RIM, Apple, Nokia.

With less than 100 hours until the show, we don’t really know much about Windows Mobile 7. Sure there are rumours, but it’s too close to the unveiling for anyone to really care. Knowing Microsoft, they’ll have plenty of videos online showcasing the new UI, the engineers who developed it, a terrible commercial for it, and Steve Ballmer will say something so awkward and so funny that his sound bite will get copy and pasted across the net.

What we do know, with 100% certainty, is that the next version of Windows Mobile will be called Windows Phone 7. Microsoft Canada accidentally put some information on their site mentioning it and it has since been removed. Microsoft Kitchen was quick enough to grab these screenshots while the info was still up: 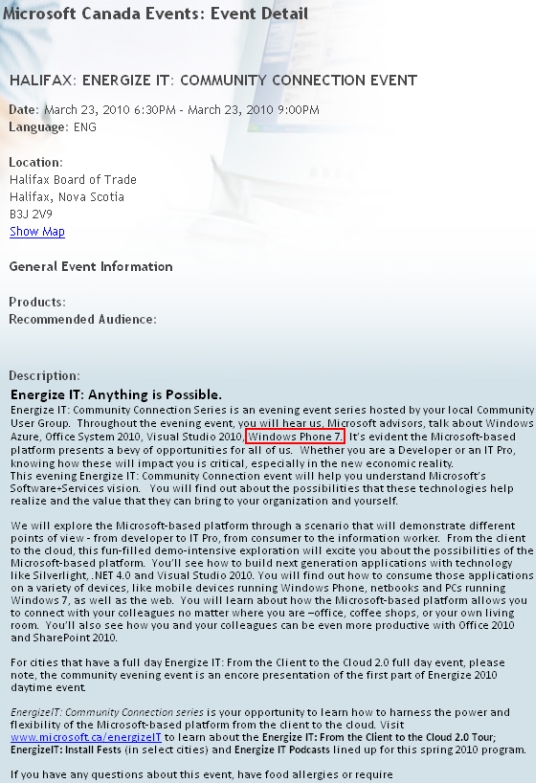 Pharos 565 unveiled all in its rugged Windows Mobile 6.5 glory

Pharos has unveiled a new device, which is seemingly targeted towards the industry. It's the WinMo 6.5-powered ruggedized Pharos 565,...