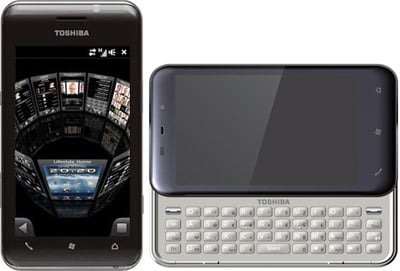 Toshiba unveiled two new phones at the Mobile World Congress today. We don’t have all the details at present, but I’m sure full specs will emerge within days. The devices announced are the long-time rumored (and FCC approved) TG02 and K01, both of which get their power from a 1GHz CPU (we guess Snapdragon) and both running Windows Mobile 6.5. Here’s the specs rundown:

In addition, I’m guessing both phones sport HSPA and WiFi connectivity, GPS, Bluetooth and so on…

And for the record, we’ve seen these in that leaked Toshiba roadmap back in April of last year.

A company called Comsys Mobile is demonstrating what they say is the first multimode mobile WiMAX/GSM-EDGE Android smartphone reference design...