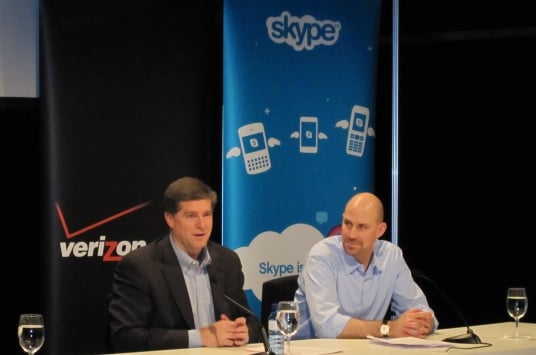 The first few minutes of the joint Verizon Wireless and Skype press conference was loaded with jokes from the two guys pictures above, John Stratton, Chief Marketing Officer of Verizon on the left, Josh Silverman, CEO Skype on the right. They’ve said that this news has leaked multiple times over the past 12 months, but no one believed it because it’s so unlike Verizon to announce something like this.

What’s essentially happening is that Verizon worked together with Skype to create an application called Skype mobile. It’s going to become available in March for various BlackBerry devices, and both the Droid and the Eris. Skype to Skype calls will be free, Skype calls done to regular numbers will use Verizon’s current 3G network, and that’s it really, nothing really ooo or ahhh to report.

http://phones.verizonwireless.com/skypemobile/ should be going live by the end of the day with more details.

Update: The press release that was issued out to this, huge waste of ink and trees by the way, was just posted on the internet. Headline edited too, Verizon didn’t say anything about preinstalling the application, or maybe they did, I don’t know. I left the press conference soon after I realized it wasn’t interesting. Say 5, maybe 10 minutes.