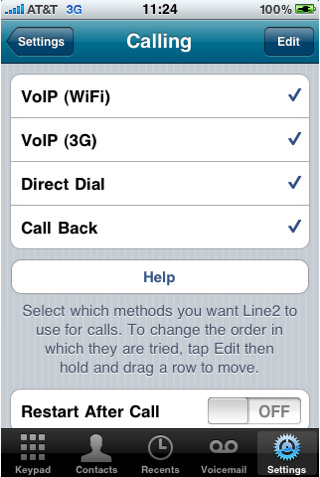 It seems Apple has changed their tune on the way VoIP apps are allowed to make calls on its iPhone. Apple has just approved an update to the Line2 app that actually allows the iPhone to make and receive phone calls over a 3G or WiFi internet connection. That’s a stark departure from Apple’s previous stance on the issue, when, just this past year, Apple gave the Google Voice iPhone app the cold shoulder and locked it out of the AppStore. A lot has changed since then.

The Line2 iPhone app essentially gives any iPhone an additional phone line (a business line, for example) with which to handle incoming and outgoing phone calls. Until now, though, the Line2 app was limited cellular connectivity only. This new version of Line2 for iPhone finally gives the app the ability to route all those business phone calls over WiFi and 3G data networks, with the cellular network serving as a fall-back option for when WiFi or 3G is not an option.

The new WiFi and 3G options make it a mostly reliable way to add a second phone line to your iPhone, or an easy way to avoid roaming charges for incoming and outgoing phone calls when overseas. The app even gives you serious business phone system features like auto-attendant (“Press 1 for…”), call screening, caller-specific call forwarding, after-hours settings, and voicemail by email.

Unfortunately, the only way to receive phone calls through WiFi is to keep the app open on the iPhone. Without the ability to multi-task, the iPhone won’t allow the Line2 app to take calls when not active.

Toktumi CEO Peter Sisson says that they are working on building push notifications into the app so that you don’t have to have the app running in order to receive the call over WiFi. The app would give you a heads-up on incoming phone calls with a push notification that would launch the app and allow you to pick up the call. If Apple ever allows the iPhone to run apps in the background, Line2 will basically allow you to completely circumvent AT&T’s network altogether. But, that’s going to be up to Apple, so we wouldn’t bet on that happening.

We’re also told that upcoming versions of Line2 will incorporate the ability to hand-off calls between multiple connections. The next version of Line2 will be able to switch calls from WiFi to 3G, and a future version of the app will allow VoIP calls to hop from data connections to the cellular network.

For now, though, you’ll have to keep Line2 running to make the best use of the app. It costs $0.99 in the AppStore and comes with a free 30-day trial. If you continue to use the app after that, it will cost you $14.95 a month.

Wondering how Line2 measures up against the competition? Check this out: 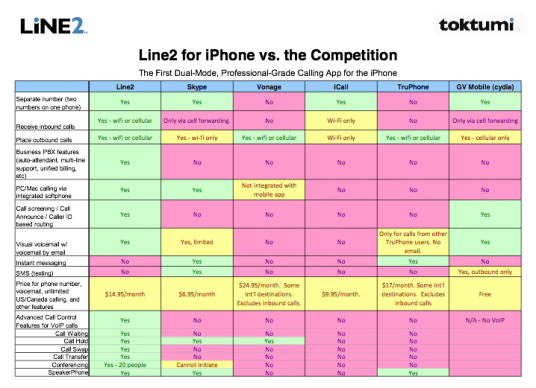 Coming soon to the Apple App Store for iPhone and iPod Touch is a game that every Canadian would be...