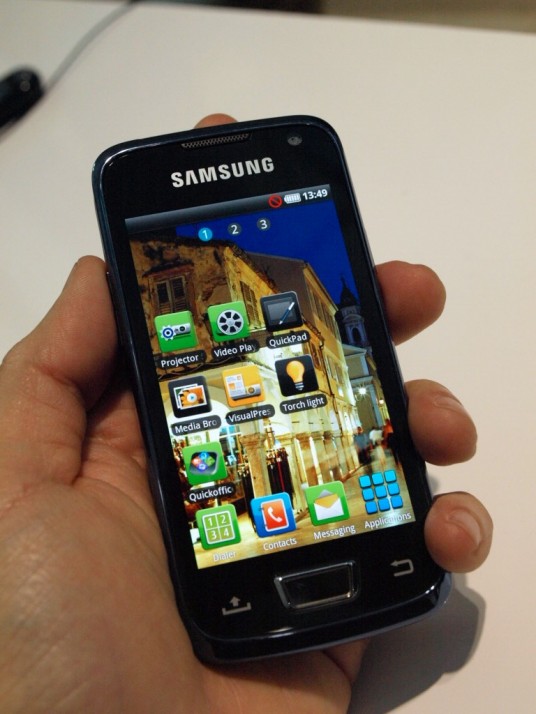 When it comes to phones with pico projectors, we’re used to seeing mobile phones with unsightly projector add-ons or, at the very best, bulky projector housings that are seemingly slapped onto the top of the phone. That all changed when we put hands on the Samsung i8520 Beam (Halo). The Samsung i8520 isn’t just an feature-filled Android phone, it isn’t just a projector phone, it isn’t just a smartphone with a crystal clear AMOLED display – it’s all of those things, rolled into one decently slick package.

We’re not sure what to call this thing – it’s been referred to as the i8520, the Beam, and the Halo. Whatever it is, it’s definitely one of the most seamlessly integrated pico projector phones we’ve ever had the chance to play with. And, to make things even better, it’s not unwieldy or lacking any of the features befitting a high-end smartphone like the Samsung i8520.

The phone isn’t too big, but it’s certainly no featherweight. It’s smaller than other pico projector phones of months past, but it’s still a good deal bigger (taller, thicker) than the Nexus One or even the somewhat monstrous Nokia N900. To be fair, though, neither of those phones have a built-in projector that can splash WVGA video on any surface your little heart desires.

Aside from it’s standard projector functions, which can project media as well as anything on the screen, the i8520 can actually project anything you place in front of its 8-megapixel camera. Just like one of those overhead projectors that still bring up flashbacks of high school lectures, the Samsung i8520 Beam is capable of displaying a document, a product, or just the back of your hand onto any wall. It’s a really cool feature that makes a strong use case for anyone that makes presentations in conference rooms.

One thing, though, is the Samsung Beam’s projector brightness. Being a tiny little projector no bigger than a 5-pack of Juicy Fruit, it’s understandable that image brightness isn’t going to compete with the $1,000 projector in some home theaters. Still, don’t bank on using the Halo’s projector in anything resembling a well-lit room. The video below shows how washed out the image can get in non-ideal environments.