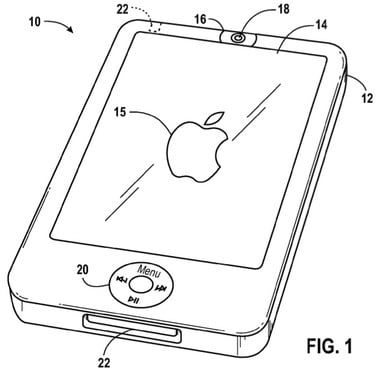 Again and again we go through Apple’s patents to see what Jobs&Co are preparing for the future. The latest thing we caught deals with camera functionality, showing Apple’s plans to improve the camera performance and also depicts a device with a front-facing facing camera.

The application entitled “Apparatus and Method for Compensating for Variations in Digital Cameras” criticizes the current manufacturing process for digital video cameras, pointing out its inconsistencies which often result in flaws. The problem is that camera modules are manufactured separately and are later on incorporated into devices.

Here’s an excerpt from the application:

Similar cameras manufactured on similar product lines may operate non-uniformly. For example manufacturing variations may result in variations in response to external stimuli, such as ambient light. Such variations in camera responses may produce a non-uniformity in images rendered by digital cameras of the same type, consequently, leading to an inconsistent product performance and to variations in product lines(s).

Apple’s idea is to allow a more uniform level of quality by using acquired “video images of colored light” and then measure a light intensity of response of the camera to that colored light.

Another method talks about employing a “signal processor” that would adjust the calibrated color intensities of images and videos and compensate for them based on a preconfigured calibration.

Finally, and this is where it gets really interesting, the accompanying images show a device with a front-facing camera… We’ll keep watching and keep you guys and gals in the loop. Stay tuned…

It seems Apple has upped the over-the-air download limits from 10 to 20 MB, without noticing anyone. The screenshot, which...