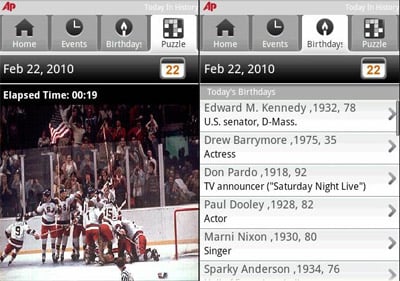 AP is bringing its “Today in History” content to the Android community. The newly released app readily waits for those willing to pour out a buck (99 cents) in the Android Market.

According to AP, the application aims at history buffs of all ages, including teachers, parents and kids. Content includes events and photos from AP’s archive, including a “Highlight in History” screen with a photo and a related sliding picture puzzle game. Plus there are celebrity and notable birthdays on that day.

The screenshot above illustrate the application working on Monday, February 22nd. As you can see, it’s Washington’s birthday, as well as the late U.S. Sen. Edward Kennedy and Hollywood celeb Drew Barrymore’s birthdays. It’s also the 30th anniversary of the U.S. hockey team’s victory over the Soviet Union in the semifinals of the Winter Olympics in Lake Placid, New York.

WeFi, the company behind the community-based global WiFi network, used the Mobile World Congress to launch the WeFi API to...