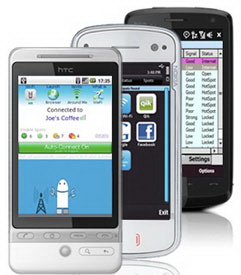 WeFi, the company behind the community-based global WiFi network, used the Mobile World Congress to launch the WeFi API to enable Android application developers to “benefit from WeFi’s award-winning WiFi technology.” What this actually means is that developers will be able to insert a snippet of code in their applications which would allow for fast connection to WeFi hotspots around the world. In addition, WeFi will share its “extensive detailed intelligence relating to over 50 million hotspots worldwide,” though I’m not sure how that helps. Moreover, Android app developers will be able to access the list of all available WeFi hotspots to eventually guide user to the nearest WeFi location or use the information in some other way.

Finally, WeFi wants us to know that there are already some apps that take advantage of the new API, including:

And in case you’re interested to make WeFi-enabled apps, you can get additional information about the new API from this page on their website.

MoSync joins the app store race with its cross-platform solution

A company called MoSync is joining what seems as an unstoppable app store wave with its own cross-platform solution, based...