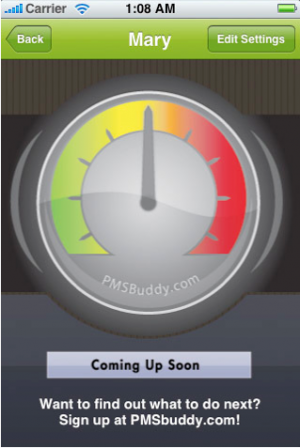 Good news for those of you living in constant fear of your significant other’s potentially volatile menstrual cycles – you now have a friend in the new PMS-tracking  PMSBuddy iPhone app. Just as the name implies, the PMSBuddy is an iPhone app that keeps track of when your lady friend’s “Aunt Flo” comes into town, so that you know when to be on your best behavior.

PMS, short for premenstrual syndrome, isn’t a problem for everyone. But, if your girlfriend/fiance/wife/etc. is sensitive enough to the hormonal swings associated with Mother Nature’s gift, you’ll probably know all too well how dangerous it can be to forget your manners during those “special” times of the month. PMSBuddy can track multiple menstrual cycles to let you know when the women in your life are nearing there “period.” And, to add to the PMSBuddy app’s somewhat insensitive nature, the  slightly offensive “PMS Meter” displays warning levels ranging from green to red.

If you’re more the type to worry about getting PMS personally, you can use PMSBuddy to track your own cycles. The makers of the app are also planning a Fertility Buddy to help women keep track of ovulation cycles in one handy iPhone app.

There are already 100,000 users signed up with PMSBuddy across the Facebook app, website and iPhone app. A future version of the app will integrate push notifications to alert you to looming PMS cycles, as well as a GPS-enabled flower shop locator for those of you that let a wrong word or two slip out in that oh-so-critical week of the month.

Now, as much as we can see a use for an iPhone app like this, we have to wonder how offensive it is to women that deal with PMS on a monthly basis. What say you? Is the app useful, funny, or just in bad taste?

Opera Software scored another carrier partner - Russia's MTS, which will provide a co-branded version of the Opera Mini browser...