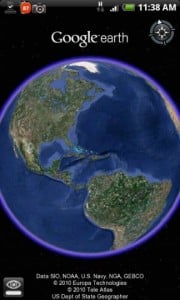 One of the most anticipated applications for Android  was demoed at the Nexus One announcement:Google Earth. Although it was promised soon after the launch, we are approaching the end of February, and finally it is in the Android Market. That is, only if you are one of the (what, 100, 000?) Nexus One users.

Google Earth has been available on the iPhone for some time now, and now that Google has released the application for their own operating system, of course their are a couple of other features not found in its counterpart. Although differences are few, Google has added something called ‘Look-Around mode’, which allows the user to get a 360 degree view from their location, a couple thousand feet in the air. Also available within the application is a Layers option, which enables an overlay of the current map with things like places, businesses, Wikipedia, roads, terrain, etc., much like Google Maps for Android. Multi-touch, and double tap are also enabled in the app, and its rendering time is quite snappy thanks to that good ol’Snapdragon. The application has yet to be officially announced, so  keep an eye out for an update!

I told you about this one just a little while ago... and as expected, Stinger Table Hockey has arrived in...