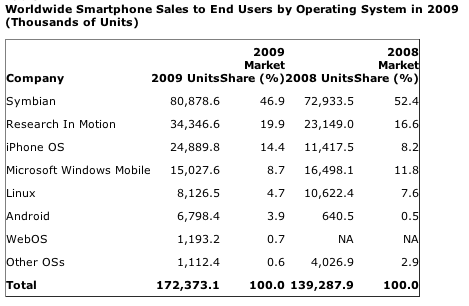 But, Apple wasn’t the only winner last year. BlackBerry smartphones, made by Research In Motion (RIM), took home an extra 3.3% of the smartphone space, giving it 19.9% share. Android OS expanded its reach 3.4%, bringing the Google mobile operating system into single-digit market share percentages (up from 0.5% in 2008). That’s a big milestone for Android, as it continues to make itself known through headlining new handsets like the HTC Legend, Google Nexus One, and Motorola Droid. 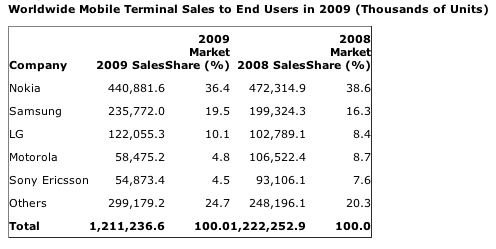 Unfortunately, things aren’t all roses for all smartphone platforms. Nokia’s Symbian phones lost ground to the tune of 5.5% in 2009, leaving the giant Finnish phone maker with just 46.9 of the global smartphone market. Windows Mobile shed nearly a quarter of its share, dropping 3.1% to end the year with 8.7% share.

Meanwhile, smartphones sales hit 172 million units last year, which amounts to a healthy 24% increase in smartphone sales over the previous year. In contrast to that kind of impressive growth, the overall mobile phone market remained stagnant, with 1.2 billion units sold.

In the end, Nokia and Symbian are still the giant Siamese-twin gorillas in the room, with BlackBerry following a distant second. If things keep going in this direction, Android will soon overtake Windows Mobile and give up the No. 2 smartphone spot to the iPhone. But, that’s assuming the newly revealed Windows Phone 7 Series doesn’t stem the exodus from Microsoft’s mobile operating system.

No matter how you slice it, the smartphone pie keeps growing. We like what we’re seeing here.