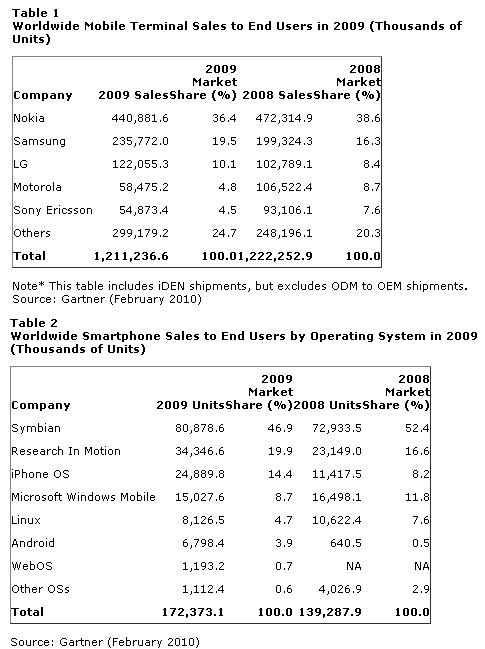 Gartner has just published the results of some of their latest research regarding the performance of the world’s big-name cell phone manufacturers and platforms over 2009, and hints at where we’re headed next.

Android, iPhone, and to a lesser extent, BlackBerry, are poisoned for substantial growth, while Nokia (though still the world leader), Sony Ericsson, and Motorola are on the decline. Of course, that’s not to say there’s no hope for them whatsoever in 2010 – Linux handsets saw a significant drop, but I could see the First ELSE doing a lot to popularize the platform, and Motorola stands to do very well once their huge family of Android handsets make the rounds. RIM maintains a firm grip on the second place for smartphone market share, and given Symbian’s slow and steady drop continues, BlackBerry could overtake them in time. That, of course, is contingent on iPhone’s momentum slowing down, which seems unlikely at this point. It’s a little sad to see webOS making so little traction, but the smartphone world is getting quickly crowded, so someone will have to be shouldered out sooner or later.

Whatever happens, it’ll be an interesting 2010, that’s for sure sure.

Nokia Research Center videos usually have a bit more technical detail that what you're about to watch below. In the...