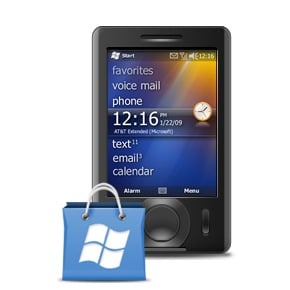 Windows Phone 7 Series captured everyone’s attention when Microsoft unveiled the more consumer-friendly smartphone platform destined to succeed the mobile OS dinosaur we know as Windows Mobile 6.5, but that doesn’t mean Microsoft is going hands-off on Windows Mobile just yet. Seeing as how Windows Mobile still has several more months to go before getting one-upped by Windows Phone 7, Microsoft apparently thought it prudent to make their Windows Marketplace for Mobile a little more appealing. Windows Mobile apps from the Marketplace can now be installed directly on memory cards.

What does this mean for all you Windows Mobile 6.5 and Windows Phone 7 fans? Well, it means that you’ll no longer will you have to deal with deciding which apps are important enough to keep and which just don’t pull enough weight to justify taking up precious storage space. By allowing apps to install on a storage card, Windows Phones running Windows Mobile 6.5 are only limited in the number of apps they can play with by the size of their microSD cards.

This is an example of a small change that will have far-reaching ramifications in the smartphone space. When Windows Phone 7 Series goes live later this year, it’ll be on equal footing with the likes of the iPhone as far as app install limits are concerned. That’s big, because Microsoft has been losing the smartphone battle to the iPhone and Android phones. So far, Android can’t install apps on storage cards – a big disadvantage to Windows Phone.

For now, though, you can hit up the Marketplace and download apps with abandon. Just remember to upgrade that microSD card to a 16GB jobby.

Foursquare for BlackBerry Updated to 1.5 with Tips and Friend-Adding

The Foursquare beta app for BlackBerry continues its journey to the release candidate promised land, now with the ability to...