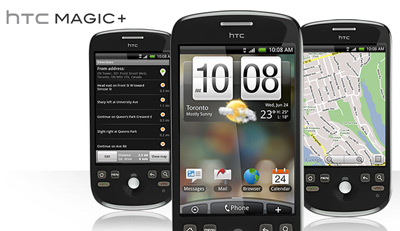 The HTC Magic and Dream have enjoyed quite a rollercoaster ride on Rogers over the past few months. An urgent 911 call fix that needed major attention prompted Rogers to put all HTC Dream data on hold and make OS updates mandatory. Word also came out that Rogers HTC Dream users would not receive any OS updates past Android 1.5, which had many a user up-in-arms. Rogers responded by offering a free upgrade to the Magic, which, seemed to work quite well. In addition to this, the Magic was even pulled from the shelves for some time while Rogers waited for the 911 fix from HTC. All appears to be good now, and things are back on track.

So much so, that Rogers feels it is necessary to rebrand the Magic as the Magic+. What do you get when you ad a + character to the name? In reality all you’re getting here is the addition of Sense UI to your Android installation. Don’t get me wrong, Sense UI is frickin’ awesome and is definitely my favorite way to experience/interact with the Android OS. But if you can look past the +, it’s still the same old Magic, 3.2″ touchscreen, 3.2MP camera with video, you know, the same old Magic…PLUS Sense UI… and it’s still available from Rogers for $79.99 on a 3-year contract.

Good news for the HTC Legend aka Hero 2 fans - the device has just cleared the FCC hurdle on...