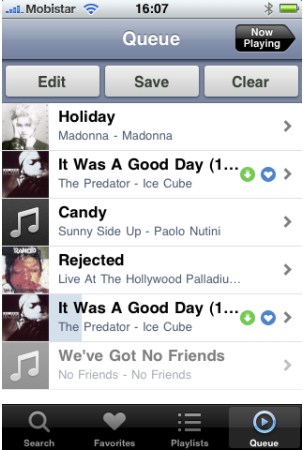 Streaming music services have been making some noise recently, but Grooveshark has been forcibly muted on the iPhone. After months of repeated rejections from Apple’s AppStore, music streaming app Grooveshark has decided to cut their losses and forgo the AppStore for the sake of giving at least a small subset of iPhone users a chance to use their service. The online music service has just announced that they are now available for jailbroken iPhones through the Cydia app store.

With millions of tracks on tap, Grooveshark offers its users a convenient way to stream their favorite tunes straight from the interwebs and into their ears. Users can search music, create playlists and denote favorite tracks – which are all synchronized with the web app – all from the convenience of their iPhone. But, there’s a catch. You have to pay the $3/month fee to get VIP access to the app. And, you’ll have to jailbreak your iPhone in order to get access to Cydia.

Is it worth it? Well, considering the relatively cheap price of the app and the fact that you can create playlists to play offline (without an internet connection), it’s a must-have app for music fans with tight budgets and unlimited data plans.

Still, it’s puzzling why Apple continues to reject Grooveshark from the AppStore. In comparison, smartphones running Android, BlackBerry and webOS have been enjoying streaming music without hassle from “the man” for a while now. Maybe Apple is looking to keep streaming music competition to a minimum in preparation for their own streaming music service through iTunes (LaLa, anyone?). Whatever the case, kudos to Grooveshark for deciding to take their app live through the iPhone “underground.”

You can find Grooveshark for iPhone through Cydia. You can get Cydia by jailbreaking your iPhone. You can jailbreak your iPhone like this. Done.

During an interview with ZDNet, Microsoft gave some more details about Windows Phone Starter Edition and it could be a good choice...