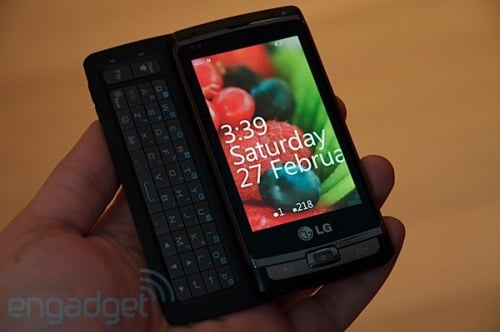 During the latest Engadget Show, Microsoft showed off a prototype LG smartphone that will run Windows Phone 7 Series.

Microsoft’s Aaron Woodman said the handset is a pre-production model but I wouldn’t expect it to change much before its release (which could be as early as September). There are no finalized specs yet but Microsoft’s requirements mean it will have at least a 3.5-inch capacitive screen with multitouch, WiFi, 3G, Bluetooth and a beefy processor. This version obviously has a full, four-row QWERTY keyboard and Engadget said it was packing a 5-megapixel camera. There are dedicated hardware buttons for Bing, power, back, home, volume, and the camera. Having that keyboard means the device will be a bit thicker than the iPhone or the Nexus One.

The LG handset looks like a pretty nice device. The requirements from Microsoft means it will be tougher for handset makers to differentiate the devices but this shouldn’t matter much if the software is as good as it looks. We’ll be sure to get some more details on the OS at next month’s MIX conference.

The smartphone space is the next big battleground for many tech giants and Microsoft is lagging behind Apple, Google, Nokia and Research In Motion. Microsoft is taking a huge gamble with Windows Phone 7 Series because it is a complete break from its previous mobile offerings. The IntoMobile team had some hands-on time with Windows Phone 7 and it uses a new interaction paradigm that appears to be very promising.

The smartphone market is actually just in its beginning phases, so if Microsoft can execute properly, it can be a major player. It has boatloads of cash, multiple partnerships and a content ecosystem that is almost equal to Apple’s mighty iTunes. While it probably won’t ever get the market share it has on the desktop, I could easily see Microsoft’s mobile platform becoming the second or third-most used mobile OS in the world. A year ago, that statement would have been ludicrous.

Nexus One Mods coming down the pipe in full force

The Nexus One's modder's have very been busy lately, turning something great into something better. First, with the new Sense...