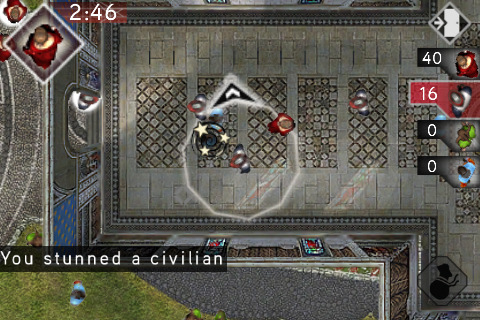 If the only thing holding you back from playing Assassin’s Creed II was its inability to be played at a top-down view while trying to assassinate 3 other players online, then it looks like Ubisoft heard your woes as they announced they have officially released Assassin’s Creed II: Multiplayer on the iPhone.  Best of all, for the next 48 hours, Ubisoft is offering a low, low price of FREE for the game.  Afterwards, the game will cost a mere $2.99.

In Assassin’s Creed II: Multiplayer, players go head-to-head via Wi-Fi connection to hunt other players.  Be careful though as your enemies are also out to assassinate you.  The game features online leaderboards, six different power-ups, 3 different environments, and friends system so you can challenge your buds to a couple of rounds of “Stick the blade in the backside”.

We say the best way to start a new week is to poke fun at Apple's apparently contradictory stance on...