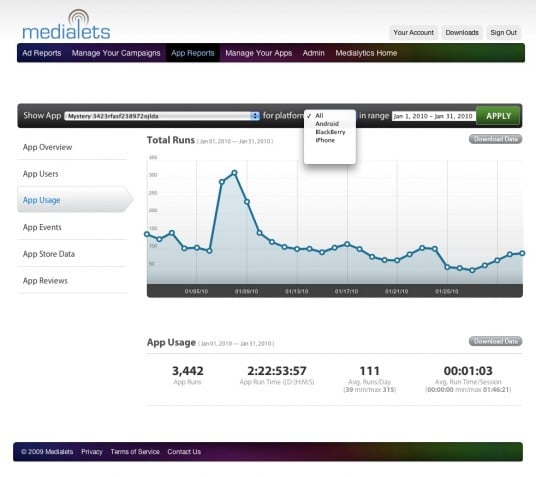 There’s no doubt that Apple has enjoyed the iPhone AppStore’s meteoric rise as the world’s single largest mobile applications store, but there’s more to the mobile world than just the iPhone. The Android platform has been gaining some serious traction recently, and BlackBerry has seen its mark share growing steadily over the past couple years. To that end mobile ad firm Medialets has released their new Medialets Analytics SDK to help mobile app devs track their wares on the Android and BlackBerry operating systems.

The Medialets toolkit is free of charge, and gives developers an analytics dashboard that makes for easy “measurement and tracking of basic metrics as well as complex custom events within all of their Blackberry and Android apps (and iPhone of course.)” The service gives mobile app makers a chance to analyze a particular app’s performance and track the effectiveness of new marketing campaigns. The best part is, it’s free – the company ultimately wants developers to include Medialets’ mobile ads in their apps.

Mobile app devs, does it make sense for you to port your iPhone app to BlackBerry or Android at this point? Will this Medialets Analytics SDK help your decision at all?

Assassin’s Creed II: Mulitplayer for the iPhone Launches for Free for 48 Hours

If the only thing holding you back from playing Assassin's Creed II was its inability to be played at a...