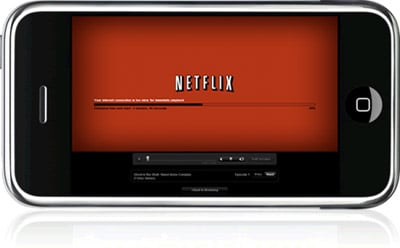 When Netflix takes surveys, we pay attention. Why? Because it usually indicates that a new product is coming down the the line. Shortly after they polled users about interest in Netflix on the Wii and PS3, we saw the service going live on both gaming consoles. So, when the company that pioneered the mail-order movie rental business starts surveying users on their interest in an iPhone app that would stream movies directly to the handset, we can’t help but get a little excited. If response is positive enough – and we can’t see why it wouldn’t be – we could see a Netflix movie-streaming iPhone app coming to the AppStore sooner than we thought.

The poll asks users what they think about the possibility of watching movies and TV shows on-demand with their iPhone. The video content would be ad-free, allow pause/rewind/fast-forward, start in as little as 30 seconds, and is included in the monthly Netflix membership fee. According to the survey, the app would only work over WiFi networks – which makes sense, given AT&T’s reluctance to allow video apps onto its 3G airwaves.

Here’s the exact text from the poll:

Whenever you want to instantly watch content on your iPhone, your iPhone must be connected to a Wi-Fi network (such as one you might have at home or at work, or in public places like coffee shops, book stores, hotels, airports, etc.)

If this functionality were available, how likely would you or someone in your household be to instantly watch movies & TV episodes on your iPhone via a Wi-Fi network?

Netflix has been rumored since days long past to be working on an iPhone app that would allow users to instantly stream movies to their beloved mobile phone. We hadn’t expected Netflix to already be considering the move to the iPhone, but this latest poll sure does make it sound like they’re making a push towards the AppStore.

Given this new development, we have to wonder how Hulu’s iPhone prospects are panning out. It’d be nice to see both Netflix and Hulu in the AppStore, but we’re not going to hold our breath for any miracles.

Verizon on track with LTE rollout

Get ready for 4G folks, as Verizon said it is on schedule to roll out its next-generation mobile broadband network...