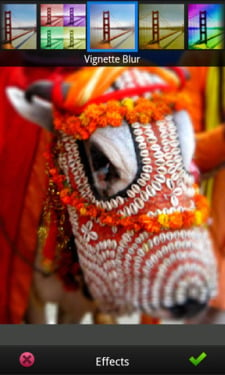 Adobe updated Photoshop for Android and made the photo-editing program available for developers to integrate into third-party applications.

This is a cool move that means we could see more robust apps because putting Photoshop into programs should be relatively easily. It’s a smart play for developers because it could eventually make Photoshop the defacto standard for editing photos on Android.

Adobe also couldn’t help but take a potshot at Apple during the announcement.

“Unlike iPhone, the Android platform allows us to make the Photoshop.com editor broadly available to developers so they can provide it within any application they are working on,” said Doug Mack, a general manager at Adobe. “Photoshop functionality can then easily be accessed from an online auction, real estate, or social media application so users can quickly fix photos and make them look their best, before being showcased.”

Adobe is just plainly speaking about the differences between the platforms but it’s a bit odd that the company would compare its products at all. I’m not saying it’s a huge deal but it does seem unnecessary. Of course, Apple and Adobe are in the middle of a struggle because Steve Jobs doesn’t want Flash on the iPhone OS. Apple says Flash isn’t good enough to perform properly on its platform but Jobs probably doesn’t want it because it could upend the App Store. Adobe is countering by soon getting Flash on Android, BlackBerry, Symbian, webOS and Windows Mobile. You have to wonder if this beef had anything to do with the unneeded shot.

I downloaded the app for the Motorola Devour and it’s rock solid. Cropping pictures is quick and easy, and the new version adds multiple new visual effects. Developers can hop over to Adobe’s site for more details and the source code.

[Via CNET and Adobe]