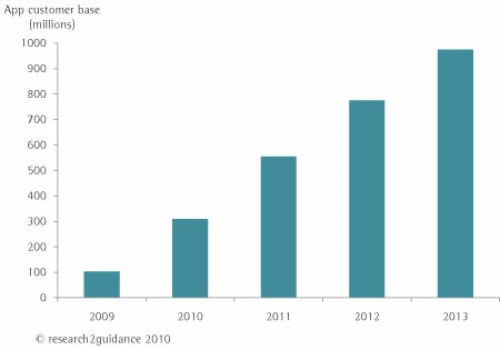 It looks like these mobile applications aren’t a fad, as a new report from research2guidance said the global app market could generate $15.65 billion in revenue in four years.

This is great growth from the $1.94 billion apps generated in 2009 and the customer base for these apps is expected to grow from 100 million in 2009 to 970 million by 2013. We all know apps have been around for a long time but you have to give Apple credit for kicking off this surge of interest with its App Store. Now, every major player has its own centralized app store and consumers are demanding these programs on their devices. While we’re seeing extreme success stories like Plants vs. Zombies, the money in apps is not quite enough yet for a large, thriving ecosystem. It looks like we’re not too far away from that though, so be prepared for some really cool stuff to come to your handsets.

There's some good news if you want to create an e-mail application for the iPhone but don't want to start...