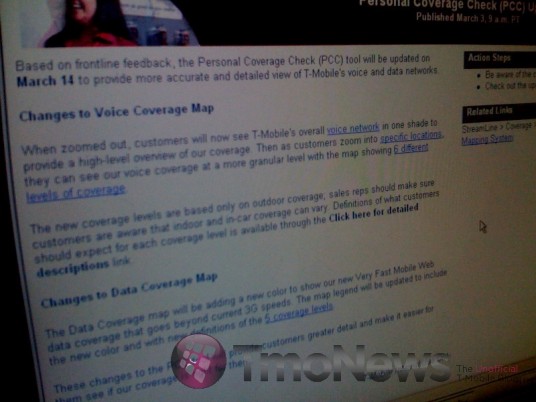 Some leaked internal documents detailing revised coverage maps seem to suggest that an HSPA+ network upgrade map is underway. T-Mobile made it clear after they had finished upgrading to 7.2 MBps HSPA that they would be looking to HSPA+ to take them beyond 21 Mbps. Reportedly, the network will launch first in Dallas, Miami, Los Angeles, Chicago, and Philadelphia, and T-Mobile will offer a webConnect Rocket internet stick to take advantage of the “very fast mobile web” speeds.

We’re already rocking some HSPA+ up here in Canada on all three carriers, but the primary bottleneck right now is hardware. Speeds this high hold lots of appeal for mobile broadband, sure, but few phones are in a position of being able to handle that much data coming in to do anything worthwhile with it. T-Mobile’s already doing pretty well on the customer satisfaction front, and are doing alright in the financials, but are still the smallest of America’s four major carriers and need to bring their serious A-game if they want to at least nab the number three spot from Sprint.

Google's European boss made it clear how important the mobile space is to the search giant, as he said smartphones...