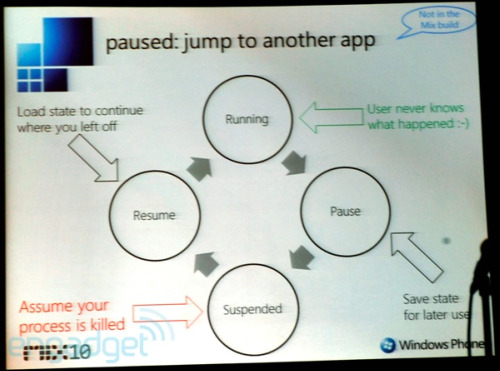 With Microsoft’s MIX 2010 winding down, we’re starting to get some clear messages about Windows Phone 7 Series. One of the major issues near and dear to my heart is multitasking, and Microsoft appears to be taking cues from Apple because third-party programs won’t be able to fully run in the background.

According to our friends at Engadget, “third-party apps are actually left running in a suspended state (Microsoft calls it ‘dehydrated’) as long as the system doesn’t need any additional resources. If the user cycles back to an app, it’s resumed (‘rehydrated’) and life continues merrily along, but if the user opens other apps and the system needs additional resources, the app is killed without any indication or remorse.” Like the iPhone, the on-board music player and browser can fully run in the background, but you’re out of luck if you want Pandora to stream while you’re switching through apps.

I know it’s almost cliche to bring up Pandora as an example, but it’s the easiest way to illustrate what you lose without third-party background capabilities. I’m not even that concerned about Pandora (although I love it), I’m just concerned that this will limit the innovation of app developers. There’s a legitimate concern about battery life and performance, but I don’t know if that’s worth giving up the potential benefits of fully opening up the platform for the best and brightest developers.

As we mentioned before, consumers won’t be able to add apps from anywhere except Windows Marketplace. Businesses will be able to deploy enterprise apps through other means though, Microsoft said. Again, this smacks of the restrictiveness of Apple, as Windows Mobile has had one of the most vibrant tinkering community and most of these people would love alternative app stores. I’ll give them the benefit of the doubt for now because if all the programs look as good as the Associated Press app, it may be worth the compromise.