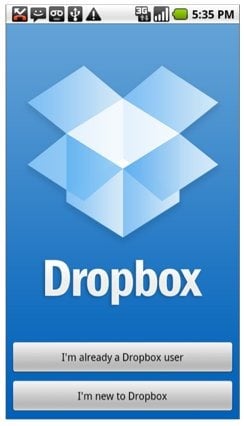 Anyone that uses the Dropbox service AND packs an Android-powered device will be tickled pink about this. Apparently, the file-syncing service Dropbox is very close to launching a new Android app… and it will pack quite a few nifty features. View files from your device, upload new files and share them, even watch movies or listen to music files (you can even choose to store the file locally too).

Other key features will include:

Access your Dropbox on the go – All the contents of your Dropbox are available for viewing. You can even stream music and movies in your Dropbox straight to your Android device.

Download files for offline viewing – Add files to ‘Favorites’ and they’ll be accessible at any time.

Upload files and sync them to your Dropbox – Take a photo, shoot a video, or upload some audio from your Android phone and email its public link to a friend in less than a minute.

Apparently a BlackBerry version of the app is on its way as well, which would give the three big players in North America Dropbox apps… BlackBerry, Android and iPhone.

Stay tuned for more on Dropbox for Android. Me thinks we’ll hear an announcement shortly…

Provider of automated cloud-based speech recognition services Yap announced that is has been selected by Microsoft to provide speech-to-text capabilities...