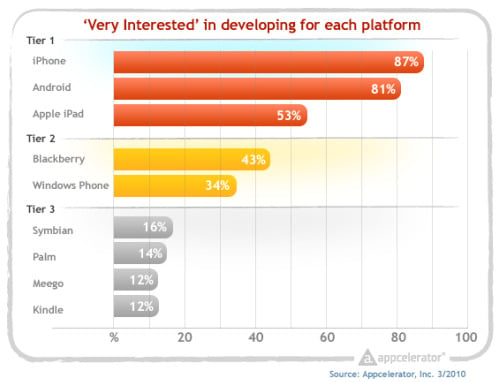 Developers are getting very excited about creating for Android app but they’re taking a wait-and-see approach with the looming iPad, according to a survey from Appcelerator.

The company surveyed 1,000 developers and found iPad interest is still pretty high but it’s not as frenzied as it was prior to the device’s proper introduction. The report said 80% of developers are interested in building an iPad app versus 90% in January. Apple’s tablet will still find plenty of content creators though, as it ranked third as the platform developers were most interested in behind the iPhone and Android. Yes, yes, I know the iPad runs the iPhone OS but this is targeting content creators who want to make iPad-specific programs. Like consumers, Appcelerator said developers are still trying to wrap their minds around what the use cases for the iPad will be. Entertainment/media, eBooks, business, medical, and education apps were cited as the main points of interest for iPad apps.

As for Google’s little green robot, 81% of developers said they were interested in creating apps for Android. This shouldn’t be much of a surprise because this platform is finally nearly on par with the iPhone in terms of audience and all the hot phones like the Galaxy S and EVO 4G are rocking Android. There’s still concern about fragmentation though, but Google is reportedly set to tackle that issue with the next few Android updates.

The iPhone still remains the most-interesting platform for developers because of its installed base and app-hungry users. Developers could be soon getting a significant boost if the platform enables third-party multitasking with the 4.0 version. I know many cool services could be enabled with this (location-based gaming jumps out at me). It’s not just Android and Apple though, as Research In Motion’s BlackBerry has seen a jump in interest as well.

“Some consider RIM to be the odd-platform-out, but our developers are telling us that BlackBerry very much meets a specific, large enterprise need for an application platform that places a premium on security and robust data access,” said Scott Schwarzhoff, VP of marketing at Appcelerator, in an e-mail. “BlackBerry’s improvements to its platform capabilities – multitouch, rich browser, media, etc. – are also positive signs that RIM is still a contender.”

Yesterday we told you that the Android 2.1 update is being rolled out to the Motorola Droid, but only to...