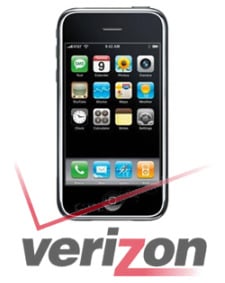 Of course, the iPhone-to-Verizon rumor has been going for years and years but the latest report had the backing of The Wall Street Journal. The problem was that the report was thinly-sourced and was filled with CYA words like “supposed to” or “said to be.”

Credit Suisse’s Bill Shope said in a research report, “We wouldn’t count on a Verizon iPhone for the holidays.” He didn’t dismiss the notion altogether, but sees this happening in 2011. UBS analyst Maynard Um also said he doesn’t believe an iPhone will hit Verizon this year.

“While a new iPhone in June is in line with our expectations, we believe a launch of a CDMA-based phone with Verizon this year is unlikely but believe a CDMA phone could be launched with other operators later this year,” Um said.

Don’t start getting happy if you’re on Sprint’s network because the analysts figure the CDMA iPhone will be hitting China, which has a proprietary standard for its network that isn’t compatible with U.S. carriers. The Chinese market is a potentially huge one – China Mobile alone has more subscribers than the population of the United States and Japan combined – and it makes sense for Apple to go after this aggressively.

If I were a betting man I’d say there won’t be a Verizon iPhone this year but at least we can look forward to a fourth-generation iPhone on AT&T. We’ve already seen shots of what the potential new unibody enclosure could look like, and there are signs it will feature a better screen, HD capabilities and a beefed up camera.