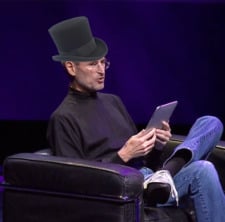 Apple has published a list of iPad-ready websites and it includes some heavy hitters that could help Apple win its war against Flash.

The list includes CNN, Reuters, the White House, Vimeo, Sports Illustrated, Time Magazine and others. A funny thing is that the New York Times’ website is under Apple’s list, as it is utilizing an HTML5 video player to deliver news videos to the iPad. This is the same site that famously couldn’t access the videos during the iPad’s unveiling, but I guess Steve Jobs showing up in a top hat can make even the Grey Lady change its mind.

The amount of Flash users still heavily outnumbers the amount of iPhone OS users but publishers are willing to adapt to reach this demographic. Adobe isn’t going to stand still though, as it is working hard to bring full, hardware-accelerated Flash to nearly every mobile platform except the iPhone. This may make users expect to be able to access Flash content on the go, which may make Apple compromise eventually.

With the iPad coming, what should Amazon do?

If I were at Amazon I would be scared of Apple. Let's face it, after grabbing the iPad, not many...