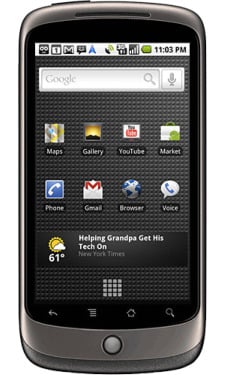 Google is a pretty good company but their greatest strength can also be their greatest weakness. This highly intelligent company of engineers lacks the common man’s touch, and this lack of emotional intelligence may have been the reason Buzz and the Nexus One haven’t been very successful.

I’ll not focus on the mess that is Buzz for now and just concentrate on the Nexus One. It’s a beautiful smartphone that just hasn’t sold that well. Sure, it was only available on the smallest carrier and now that AT&T, Sprint and Verizon Wireless will support it, the Nexus One should see wider adoption, but I’d argue that Google’s whole approach to selling phones is out of tune with the American market. I don’t care how cool your web demo is, customers want to be able to go in to a store and touch and play with a phone before they buy it.

Google appears to be understanding this misstep and it is seeking a new product marketing manager for Android and the Nexus One, according to a job posting. Specifically, the company is looking for someone on the direct-to-consumer side who will be “focused on increasing the number of sales and increasing awareness of the Nexus One brand.” This could lead to television commercials maybe – like it or not, the cell phone business needs to advertise on tv – as well as an improved launch for the Nexus Two.

HTC and Apple’s Patent Case to be Investigated by ITC

Apple and HTC have been in the midst of a legal row over patents lately, which has so far consisted...