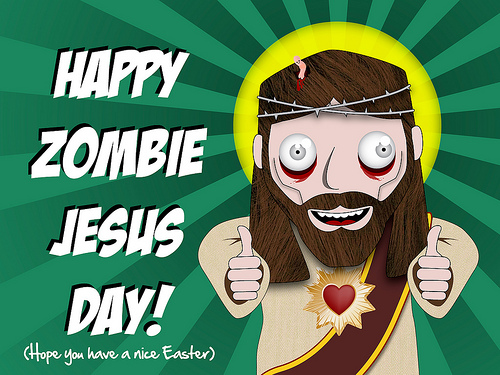 Easter, or “Zombie Jesus Day” as us secularists like to call it, has finally come to an end. Today is the day that many of you are coming back from a long four day weekend, and as such are going to spend a good portion of your working day scouring the internet, trying to catch up with the insanity that has occurred during the past 100 hours. If you actually stayed online during the weekend when both Orthodox and Catholic religions celebrated Jesus turning into a zombie, then you don’t need to read this because the mere whisper of the word iPad, combined with your already fragile mental state, may cause you to go to your nearest Apple Store and begin pumping rounds willy-nilly into anyone with white headphones coming out the side of their head.

For those who want to tune in to what happened, let’s pump out some news!

Update: For those of you who were offended, I’m sorry you don’t share the same vulgar sense of humour that I possess. Hope the new image is more suitable. If you’re curious to see the image I’ve taken down, click here.

That’s it really. You didn’t miss much, except for about 48 hours when everyone, including their mother and their cat and their mother’s cat, were talking about the Apple iPad. I envy those of you who traveled somewhere exotic, with limited access to the internet. The iPad fever was painful to watch and has scared this blogger for life.

While some of you may be just fine using your brand new iPad for when you're sitting on the couch...