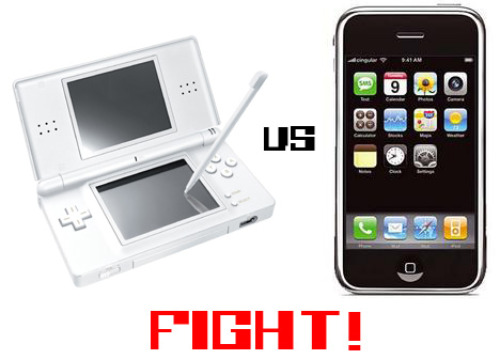 If you think all those swell games on the iPhone, iPod Touch and iPad are making Nintendo nervous, you’d be reasonable but wrong.

“I’ve seen data that suggests that while consumers are constantly downloading apps, they play with them for a few times and then they are moving on to the next thing,” Reggie Fils-Aime, Nintendo of America’s president, told Kotaku. “Clearly it doesn’t look like their platform is a viable profit platform for game development because so many of the games are free versus paid downloads.”

Obviously, some of this is just marketing bluster from the guy who’s known to have foot-in-mouth syndrome. Also, Nintendo knows a thing or two about the gaming market – the Wii and DS are destroying the competition despite not having more advanced technology. But until Nintendo’s devices feature some form of cellular connectivity, the iPhone will have that awesome ability for a consumer to browse and download games while waiting in line, or on a bus.

Nintendo also believes the gaming experience on an iFIll-in-the-blank is not comparable to a dedicated gaming machine.

“If our games represent a range between snacks of entertainment and full meals depending on the type of game, (Apple’s) aren’t even a mouthful, in terms of the gaming experience you get,” Fils-Aime said.

While this is mostly true, I’m starting to see some iPhone games that are worth spending some time on. I thought Street Fighter IV would be a nightmare on Apple’s hardware but our resident gaming expert said it was a really fun game. Apple may also be working on a major accessory that could pose a significant challenge to the gaming incumbents.

The smartphone application space is going to explode this year, as ABI Research said there will be nearly 6 billion...