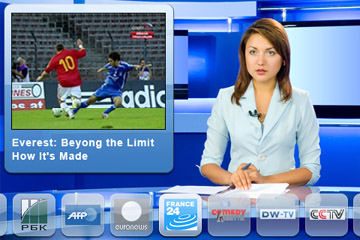 After launching the iPhone version, SPB Software is bringing its SPB TV app to webOS devices. Actually, it’s just the Palm Pre and Pre Plus that will sing along the application until firmware 1.4.1 becomes available for the Pixi and Pixi Plus users.

As you probably already know, SPB TV brings publicly available digital TV channels from all over the world to the palm of your hand. There’s a handy picture-in-picture quick channel preview feature, integrated TV guide and quite a few channels to choose from.

Like that was the case with the iPhone version, the one for webOS devices is also free – it’s ad supported, with advertisement being shown while the stream is buffering when you open a new channel.

If you want SPV TV on your Palm Pre/Pre Plus — and there’s really no reason not to try it out — simple search for the application in Palm’s App Catalog and take it from there. It’s that easy.

For those who might not know what XDA Developers is, it's a site for HTC phones (with a couple of...