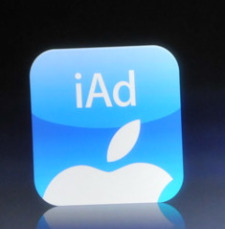 When we look back at the iPhone 4.0 announcement years from now, I believe the iAd announcement will be the most significant because it positions the company to wring even more money out of its application-hungry base.

Before we start going crazy though, let’s remember the mobile ad market is relatively small – most rosy estimates peg it at around $500 million this year. But that figure is expected to balloon up as consumers increasingly surf the web from their handsets and iAd has the potential to do what most advertisers can’t: make you care about ads. Most in-app ads are pretty boring. It’s mainly text banners that kick you out of the app if you want to check it out. Integrated into the operating system, iAd potentially makes it easier to create rich media ads to complement your app experience.

Of course, I’m just some guy in his house spouting out thoughts, so I thought it would be prudent to speak with mobile ad experts on the impact this platform could have. To be fair, both Greystripe and Medialets are going to be competitors to the iAd platform in some form, but I think their opinions offer valid insight on Apple’s potential. After being lucky enough to speak with the CEOs of Medialets and Greystripe, I believe the iAd platform could be a booming success but there will be plenty of hurdles to overcome in the short run.

Greystripe CEO Michael Chang said there are still too many questions remaining to accurately asses the iAd platform. First of all, we don’t know what the pricing models will be or what types of ad targeting will be possible. Additionally, Steve Jobs’ hatred of Flash may bite him in the behind because most major advertising firms have standardized around Adobe’s technology. It’s not a trivial matter to switch over the HTML5 because it involves work flows, authoring tools, support costs and more. Chang said in five years or so, this won’t be a major problem but it could be a stumbling block over the next few years.

But Chang praised Jobs and Apple for recognizing that in-app ads have to be more than just ported-over banner ads.

“I think the opportunity in mobile is emotion, engagement and interactivity,” Chang said. “[Jobs] showed that if you’re immersing the user in that interactivity can make a  better connection between the brand and the user.”

Medialets CEO Eric Litman also agreed that the move will lead to a massive increase in rich, compelling ads that capitalize on the mobile experience.

“Apple’s done more to move the needle in the brand community for mobile advertising than anyone else, and that was before they owned an ad network,” said Litman, in a blog post. “Now that they’re promoting rich media units on a grand scale, we’re convinced that the flow of dollars into mobile ads – across all platforms – will only increase. That’s great for Medialets and for all of our partners.”

Litman also said the people from Quattro Wireless (now part of Apple) are some of the best in the industry and that the competition should be fun to watch.

During the iPhone 4.0 announcement, Steve Jobs said Apple first tried to buy AdMob, but Google “snatched” them away. In an ironic twist, the iAd introduction could help Google overcome the governmental hurdles it’s facing with the AdMob bid because it is a clear sign that there is competition in the space.

You've heard what we've had to say about iPhone 4.0 but I know you're curious about what the developers and...