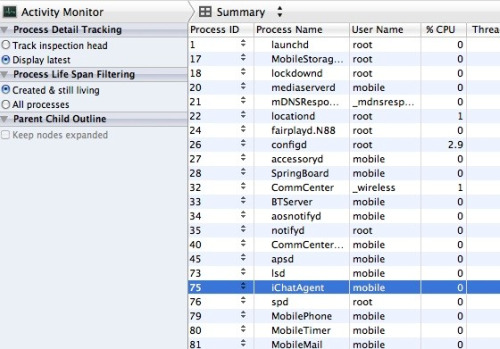 Remember those wacky predictions about video calling coming to iPhone OS 4.0? Well, screen shots over at TUAW suggest it’s not out of the question for Apple’s next smartphone.

It appears that iChatAgent – a background process needed for iChat – is running on the developer build of the latest iPhone firmware. This doesn’t necessarily mean we’re sure to get video chatting on iPhones, but I’d bet dollars to doughnuts this will at least bring video conferencing to devices like the iPad.

With high-end smartphones like Sprint’s EVO 4G sporting a front-facing camera, I wouldn’t be surprised to see this feature in the next iPhone (I’m jumping on the “iPhone HD” moniker, by the way). How would it work? Well, previous rumors suggest it would probably only be available iPhone-to-iPhone and I have a suspicion it would place a lot of burden on AT&T’s fragile network. I’m not convinced it’s a must-have feature but it will sure make for some nice ads, as well as bring about a new, disgusting age of sexting.

Oh, I also realize that lusting after the idea of video calling on a mobile phone seems ridiculous to folks outside the United States. What can I say, our telcos suck.

As impressed as I was with yesterday's news of Apple's attempt at social gaming network with Game Center, I couldn't...